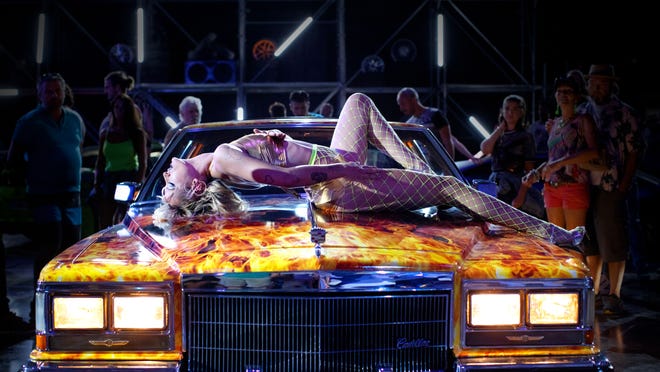 This review DOES contain spoilers for TITANE – I do believe this movie is most effective without having any idea what will happen before going in. With that being said, it feels next to impossible to write about it without mentioning spoilers. I recommend reading it after watching the film, (Playing at Consolidated Ward Theaters until this weekend) but if spoilers don’t bother you, then read at your own discretion.

TITANE had its premiere at the 74th Annual Cannes Film Festival. The film’s director, Julia Ducournau, had the honor of winning the highest prize at the festival, the Palm d’Or. She is only the second woman to have won this award, hopefully setting a precedent of women directors getting to make award winning films that are also extremely screwed-up and disgusting.

What can be said about TITANE that hasn’t already been said? Since premiering at Cannes, audience have called this picture “The Most Shocking Film of 2021” and “The Most F**ked Up Movie Ever Made” . And after viewing the film, it’s hard not to speak hyperbolic about Ducornau’s sophomore feature. Though under the titanium skin of this truly disturbing body horror film, there’s an underbelly of a sweet story, telling about gender identity and the need to take care of one another in order to not only survive, but to thrive.

I feel conflicted about this movie. We don’t get many films like TITANE these days. A film with such stylish and inspiring direction, and one with a complete original story to go along with it. Like many have said, it’s a film that is frankly deranged, provocative, and surprising in its visuals. A film that is actively making choices throughout with things like lighting and cinematography, acting, needle drops, and especially sound design. In fact you can at times see these choices being made in real time, and to me it started to become a fault. TITANE isn’t only poking at you, but scratching at your skin. The film is trying to bother you, trying to make you feel uncomfortable and look away. I very much believe this was Ducornau’s point, though it didn’t always work for me.

Julia Ducournau’s vision for this film is uncompromising in a way that’s rarely seen. I couldn’t help but notice a few sources of inspiration in this film. First and foremost are the elements Ducournau seemed to pull from TETSUO THE IRON MAN (1989); with both films using intense body horror imagery and metal fetishism as a major plot piece. Ducournau also seems inspired by David Cronenberg’s work. Combining his trademark use of body horror as well, and practical effects to make us squirm. Ducournau and Cronenberg both have a desire to use the horror genre to vividly explore the disturbing intersections between technology, the human body, and subconscious desire. Critics have noted the film CRASH (1996) by Cronenberg, a film about a man who joins a group of symphorophiliacs who are sexually aroused by car crashes, as a specific comparison to Durcornau’s film. And while I haven’t seen CRASH, that comparison seems rather valid, as this film also deals with sexuality and its connection to violence. This is a theme that isn’t anything new to Dorcornau though. She implemented that theme in her first feature RAW (2016), which could be described as a coming-of-age vampire film. Traditionally, vampirism and vampire films are normally associated with lust and human sexuality, and that is the case for RAW which “deals with the sexual (and carnivorous) awakening of a young woman who attends her first year of college”. The theme of the intersection of sexuality, violence, and in this case technology is also prominent in TITANE, expanding on the ideas Ducournau presented in her first feature in extreme ways.

Now, I wouldn’t do this film justice without mentioning the queer lens that can be (and arguably, should be) viewed through when watching this film. On the surface it’s a stylish horror film of a car who impregnates a woman, but under its surface lies major themes of the fluidity of gender and sexuality. Though with the role of sexuality being a bit more implicit than explicit. For example, are the firefighters supposed to be gay in the film? They all share a very close bond and even dance shirtless together in a scene that has very homoerotic undertones. Yet, they all look on with disdain as Adrien does a very sensual and feminine dance in front of them. Perhaps afraid of a person willing to represent themselves exactly the way they are. Who’s to say?

Though the role of gender fluidity seems to be the major theme of the film and it can’t go unnoticed. Throughout Alexia conforms to both traditionally feminine and masculine qualities, all depending on the environment she’s in. For the character of Alexia/Adrien, the gender they play isn’t even given a second thought, it’s all a means for survival. The scene of Vincent stumbling on Alexia taking a shower is emotional because Vincent accepts Adrien for whoever they are; this scene is played as if a child is coming out to their parent, and the way it’s done is completely sensitive to such a powerful moment. Ducournau also handles the discomfort and pain of the actual transition scene in a seemingly authentic, disarranging, and ultimately reverent way. For the character, It’s just something that has to be done. What’s noticeable though, is there’s no difference between Alexia and Adrien after the transition, other than the physical appearance. Alexia is Alexia, no matter what she may look like. She is still the sensual, violent, disturbed woman from before. Though, through this transition is where Alexia is able to thrive. Living Adrian’s life seems to be where she feels most safe. She found a community, a purpose, and a family, all of which she lacked in her life as Alexia.

People way smarter than me with more understanding have better and deeper things to say about the topic of gender fluidity and TITANE. For example, the website Mubi provides an in-depth article detailing both sides of the way to view gender in TITANE  I encourage you to read that and other articles regarding this major theme seen in this film.

All in all, you should definitely watch TITANE for the sole purpose of it being a really effective horror movie that can get under your skin, yet it has a sugary heart found underneath all of its titanium and motor oil. Though, I believe the heart is what ultimately distracts me from the unrelentingly gnarly visuals, and vice-versa. The juxtaposition of the film’s sentimental transgender story and grisly horror images is what prevents me from speaking more highly of this film. It just feels like it’s doing one too many things. The story tackles themes of gender, sexuality, the female body, unwanted pregnancy, aging, found family, and sexual trauma, which is all wrapped inside a subgenre of horror film that we rarely see these days. When the story and images are taken apart, each stands on its own in a powerful and near-perfect fashion. But I feel when they’re merged together the impact of each just ends up contradicting one another. I guess you can say I just don’t like to be constantly scratched at when someone’s trying to give me a hug.