WONG KAR WAI: How (and when) I watch his quintessential films 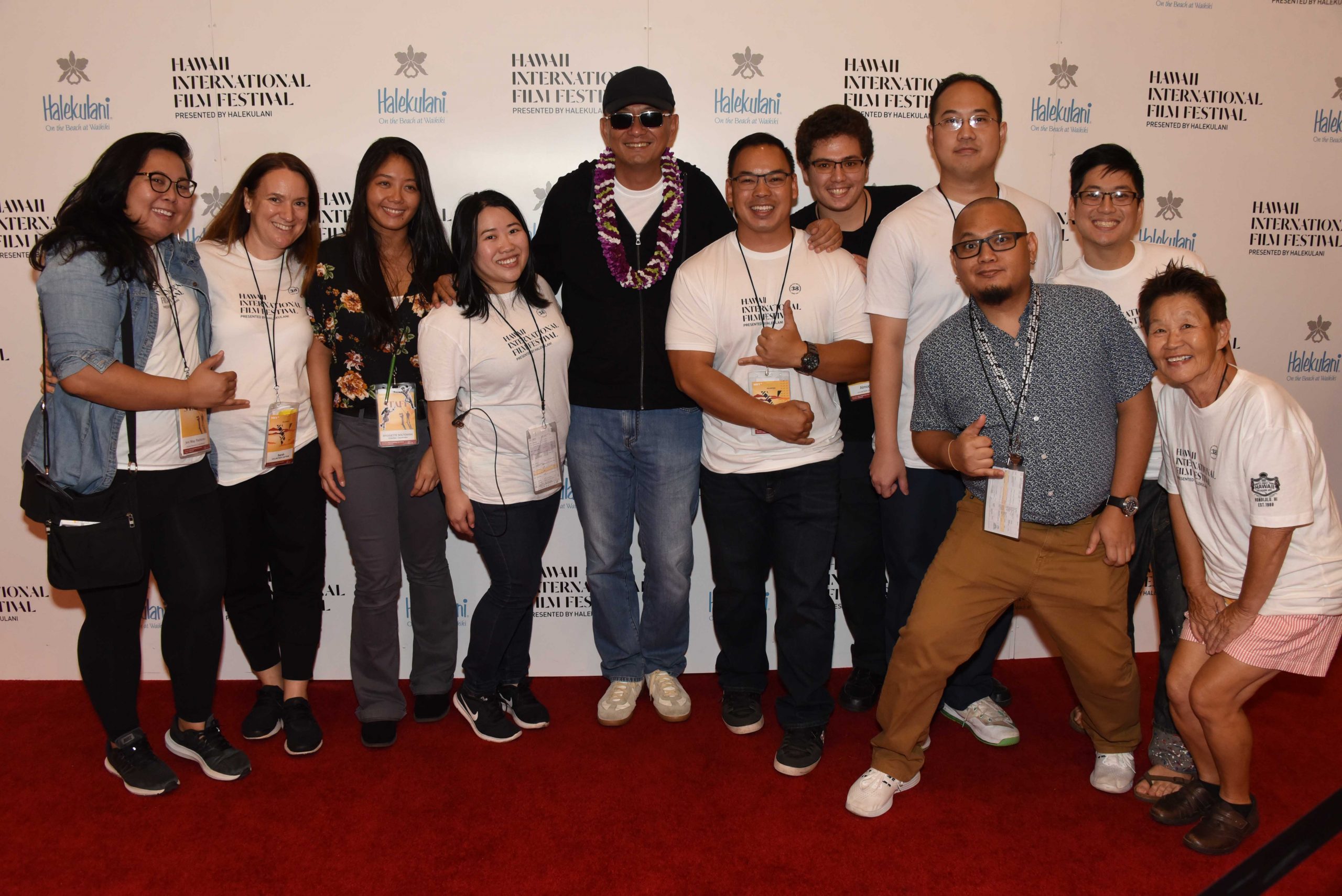 We have invited some Wong Kar Wai super fans to discuss their love for the famed Hong Kong auteur’s work in celebration of HIFF’s virtual cinema presentation of WORLD OF WONG KAR WAI, a presentation of 7 digitally remastered classic films, streaming on HIFF”s streaming platform for the entire month of February.

This is a re-posting from HIFF38 program coordinator Lee Ngo’s personal blog, when we honored the director on his first trip to the Festival and Hawai‘i.

At the Hawaii International Film Festival in November 2018, I met my favorite all-time filmmaker Wong Kar-Wai. A flood of emotions washed over me in the days that followed. Allow me to explain.

A “Disappearing” City: Urban Alienation on Film
I’ve been interested in Hong Kong since I was in high school, where I organized a debate with peers over whether the bustling cosmopolitan city should be handed over from British colonial rule to the People’s Republic of China. (It was less of a debate and more me ranting for two hours.)

That interest was bolstered when my college roommate, a graduate of Hong Kong International School, showed me my first Wong Kar-Wai film: CHUNGKING EXPRESS. Here are some clips of Faye Wong, everyone’s favorite mid-90s Asian MPDG (although this label is inaccurate with her):

Wong’s films served as a cinematic postcard of sorts, beckoning me with a unique visual style, seductive music choices, and a guarantee that I will have my heart broken and rebuilt again and again. When I finally went to Hong Kong in October 2017, I shamelessly re-created some moments that I wrote about previously:

I’ve seen almost every film in his portfolio since (except MY BLUEBERRY NIGHTS — I just don’t know why I should), thus actually standing in his presence and getting a serious response to my question at the Q&A at HIFF 2018 was … unreal. (Big love to Anderson Le for making it all happen.)

His films correlates with my own general emotional evolution, living on the outskirts of the mainstream in a state of repressed hysteria, constantly questioning my right to happiness or even my ability to love. Each film hit me at a particular moment in my life.

I’m curious as to whether you’ve had the same experience. Let’s begin.

CHUNGKING EXPRESS (1994) / FALLEN ANGELS (1995)
The film your friend majoring in Asian Studies insists that you watch.

I’m lumping these films together because they are often considered companion pieces of one another. Both are decent primers to the general cinematography style of Wong: low-frame rate captures that are slowed-down in post-production, creating a ephemeral, wispy aesthetic.

While FALLEN ANGELS is quite sexy, visceral, brooding, and seductive in its own right, my heart belongs to CHUNGKING EXPRESS’S whimsical, tongue-in-check approach to both films’ core theses of managing personal loneliness, isolation, nostalgia, and melancholy.

When to watch: These films should be the first Wong Kar-Wai films you watch. Wide-eyed and full of hope, Wong entertains your sophomoric notions of romance for a little while longer before crushing those ambitions elsewhere. I saw this in my first year of college — just enough to get me hooked on more subtle psychological and emotional torment.

DAYS OF BEING WILD (1990)
Players always think they’re winning the game. There is no game.

This one is perhaps my personal favorite, mainly because I’m quite enamored with two of the leads in Leslie Cheung and Maggie Cheung.

The film focuses on Yuddy (Leslie Cheung), a playboy with a pathological penchant for seducing naive women and breaking their hearts, likely stemming from some deep Freudian abandonment issues.

The relationships are soul-crushing to watch as cast-aside lovers plead for reciprocity when there is none offered, and deep-seeded pain will not be met with closure or catharsis. This film is the start of Wong Kar-Wai’s potential thesis on romantic love: it’ll always be beyond your reach.

When to watch: I saw this much later than I should have, which I wish was between my first and second years in college. Something snapped in me long ago: I went from being a nice yet naive romantic to a greedy, vindictive lover — all because I loved someone who couldn’t love me back.

There’s a part of me that fears I’ve never fully recovered from that.

HAPPY TOGETHER (1996)
The one relationship we’ve had that turned us all into monsters.

This one is arguably the saddest Wong Kar-Wai film of all.

Two Hong Kong lovers go on a vacation in Argentina and completely disintegrate, unable to recognize their incompatibility until it’s too late. There’s no option for contentment, and only when one of them is too broken to be cruel and selfish to the other does their relationship actually work.

Do we love one another best when one is incapable of hurting the other? What does this mean for those who refused to be crippled or controlled?

When to watch: I saw this film roughly near the end or right after two particularly destructive relationships. What’s worse is I think I was the more chaotic one that begged others to validate my self-worth.

Side note: it is important to acknowledge that this film is about a relationship between two men, made in a time when multi-dimensional representations of LGBTQ relationships were rare and often fell into caricature. That adds a dimension of repression and anxiety to an already stressful cinematic experience.

IN THE MOOD FOR LOVE (2000)
Marriage is a terrible institution. So let’s uphold it.

Generally considered the apex of Wong Kar-Wai as a technically gifted filmmaker, IN THE MOOD FOR LOVE is about two married neighbors in 1960’s Shanghai (Maggie Cheung and Tony Leung) who are forced to cope with their respective spouses’ affair with one another.

Their relationship is the subtlest of emotional ballets between people who feel pressured to keep up social appearances while grappling quietly with questions of their own rights to happiness and love. It raises the questions of the virtue of fidelity in a space where perception and guilt are the primary regulators.

When to watch: Maybe… never again.

I actually couldn’t bring myself to watch this at HIFF. I’ve seen it several times before, but not after getting married. I’m almost afraid to look into that mirror and see something I’m not ready to handle. This film forces me to question everything: marriage, propriety, affection, morality, and the curse of memory.

Excuse me while I go whisper all of my secrets into an indent at Angkor Wat. I may be a while.

Notably absent from my analysis (and why)

I could go on and on, but I restrained myself from going deeper into other works for the following reasons:

ASHES OF TIME (1994) — it’s hard for me to like a film that a director can’t stand behind. Wong speaks of this one with frustration, and it shows. After seeing it on the big screen, I thought it was beautiful yet a bit vapid and forced.

AS TEARS GO BY (1988) — I like this film, but there’s nothing comparatively profound about it to me. As a remake of Martin Scorsese’s MEAN STREETS, it holds up well as a solid gangster drama and has hits on Wong’s future talents. I just don’t have more to say than that.

2046 (2004) — I had a lot of trouble with this film, especially seeing it shortly after its loose prequel IN THE MOOD FOR LOVE. I don’t feel like the film added a necessary chapter to a film that is so great on its own. Maybe my crush on Zhang Ziyi faded by that time. It just felt … redundant.

MY BLUEBERRY NIGHTS (2007) — I haven’t seen this one. Someone described it to me as “basically Wong Kar-Wai’s greatest hits with mostly Caucasian faces,” and I was immediately turned off. The title alone hints at borderline self-parody. What’s the story that needed to be told? I’ll have to see it on a dare.

THE GRANDMASTER (2013) — I did see this, but I had concerns. This was one of the trillion films that came out around this time on Ip Man, Bruce Lee’s legendary wing chun instructor. How come Wong Kar-Wai joined the pack when part of his charm is that he’s an iconoclast?

ANY OF HIS SHORTS — he’s made quite a few of them, and I think he clocks in most of his films at the 90–100 minute mark because that’s how long it takes for him to get his point across. For that reason, his short films are going to feel unfinished to me.

What do you think? Did I get too real? I could go on and on. These films are tremendous, but I’d recommend a lot of intention and built-up constitution prior to watching them. Watch them again and again if you have to… but only if you can.