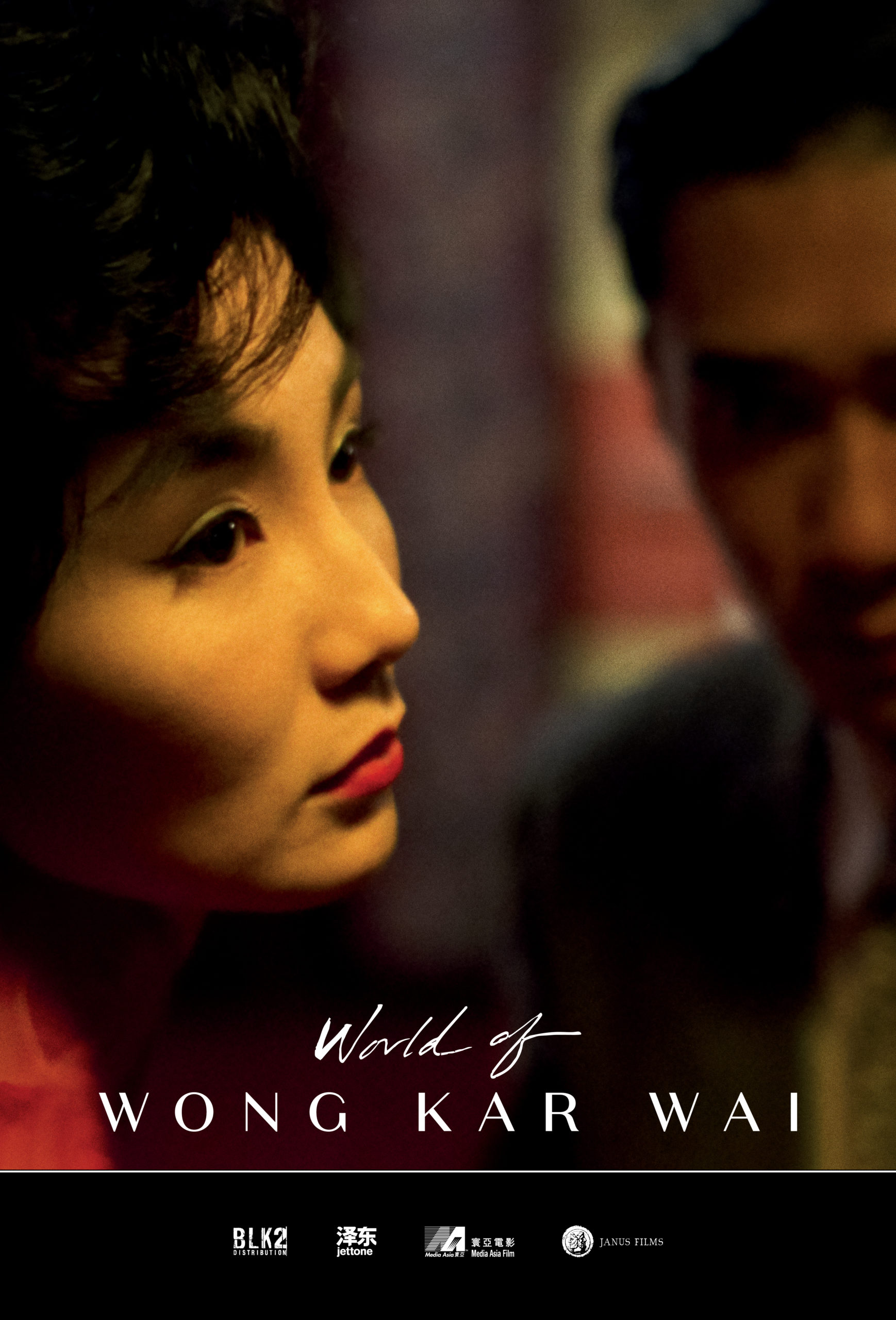 We have invited some Wong Kar Wai super fans to discuss their love for the famed Hong Kong auteur’s work in celebration of HIFF’s virtual cinema series of WORLD OF WONG KAR WAI, a presentation of 7 digitally remastered classic films, streaming on HIFF”s streaming platform for the entire month of February.

Here is a blog post from HIFF’s Artistic Director Anderson Le, who writes about some choice cuts from the quintessential WKW mixtape.

Lovers, loners, dreamers, and drifters all haunt through the many alleys and tenement buildings in a Hong Kong limbo frozen in cinematic amber in the mind’s eye of Wong Kar Wai. Much of his cinematic reverie that are dreamily captured in the seven films as part of Criterion’s WORLD OF WONG KAR WAI series (now streaming on HIFF) showcase iconic Hong Kong actors and expertly lensed by the likes of Christopher Doyle and Mark Lee Ping Bin.

Although the visuals are often lauded in Wong’s oeuvre, one can argue that the music is on parity in infusing the ubiquitous “WKW-ness.” Much like other auteurs like Quentin Tarantino, Martin Scorsese and Jia Zhang-ke, just to name a few, pop songs in Wong’s films serve as an escapist machine for many of his characters. It is a vehicle to dream up ties to places they’ve abandoned, and others they miss without having ever visited. Sometimes, music is drawn directly from the director’s memories of youth, like the love ballads in English, Mandarin, and Spanish that would play on the radio in the background as Shanghainese emigres would gossip while playing mahjong. It invokes a sense of cultural crossroads, especially in 1960s Hong Kong.

However, Wong’s use of popular western pop songs are interestingly used to convey character traits that are culturally different from other usage in Hollywood fare. Nowhere is this more apparent than in CHUNGKING EXPRESS (1994), and in Faye Wong’s relationship with the song that traverses it as her personal anthem: The Mamas & the Papas’ 1965 classic “California Dreamin’.”

This song appeared in another 1994 film, Robert Zemeckis’s FORREST GUMP, which was an anthem of West coast counterculture, as well as an anti-Vietnam war cry. Those references, however, are lost in CHUNGKING EXPRESS and emphasized more literally in the song’s lyrics, underscoring Faye’s desire to visit California as a romanticized escape.

But, it was Faye Wong’s Cantonese cover of “Dreams” by the Cranberries that inadvertently lived beyond the film and changed Cantopop forever.

In a Quartz article published after the untimely death of The Cranberries lead singer Dolores O’Riordian in 2018, “The Irish band inspired a number of Hong Kong pop artists in the 1990s and allowed them to break away from the traditional Cantopop music format that had so dominated the industry. No Cantopop singer was more inspired by the Cranberries than singer Faye Wong.”

Last month, an article on Mubi entitled “The Rhythm of Dreams: Wong Kar Wai In Five Songs,” explores another seminal Western to Cantopop cover song, “Take My Breath Away” by Berlin (originally made famous from the TOP GUN soundtrack) in AS TEARS GO BY: The bar goes quiet for a second or two, until a jukebox starts singing a Cantonese rendition of Berlin’s 1986 hit “Take My Breath Away”, which catapults Wah into a bus, Lantau-bound. There’ll be many other indelible musical sequences in Wong’s filmography, but this is the first in which a song functions as an epiphany, unlocking and expanding a character’s subjectivity. In a body of work peopled with all manners of dreamers, of psychically broken drifters fumbling after mirages of happiness and love, music offers Wong’s characters a kind of solace, a refuge in which they can live out their fantasies.”

The jukebox is a totem that has been used in several of Wong’s films including CHUNGKING EXPRESS and MY BLUEBERRY NIGHTS. Dennis Brown’s “Things In Life” is a perfect song that encapsulates that feeling and tone of other ex-pat ports that share similar tropes of Western influence/encroachment, cultural fusions, and whenever a character inserts that coin into the ‘box, you can expect an insular examination of mood and tone through Wong’s signature musical montages.

Whenever this song pops up on my Spotify playlist, I vividly see spinning CDs…

Latin American beats also inform Wong’s films from the chaste (well, the final cut anyway) and unrequited romance in IN THE MOOD FOR LOVE with Nat King Cole’s rendition of “Quizas, Quizas, Quizas,” as well as other cuts from his Spanish language album that play diegetically throughout the film. There are multiple layers with the use of these songs, because the Hong Kong characters in the film do not understand the lyrics, nor did Cole himself, who did not speak Spanish, revealing a surface level appreciation of the song without fully understanding its meaning or implication.

However, Wong’s use of music in HAPPY TOGETHER (the title itself is taken from a signature song by The Turtles), starring Leslie Cheung and Tony Leung, lacerates these lovers, and reverberates tragic love and heartbreak right to its very core. The use of Astor Piazzolla’s “Tango Apasionado” is perhaps the director’s greatest use of music in all of his films. The push and pull of desire and “letting go,” where Ho (Cheung) teaches a downtrodden Lai (Leung) the tango in a communal kitchen turned dance floor, is an artistic expression of their passionate romance, argument and brawls, highs and lows.

On par with “Tango Apasionado” is “Yumeji’s Theme” in IN THE MOOD FOR LOVE. In an iconic 2 and 1/2 minute sequence, dubbed “the corridor glance,” where Maggie Cheung gracefully walks alone to fill her thermos with noodle soup takeaway, while the very dapper Tony Leung heads to the same spot but from the opposite end. The use of “Yumeji’s Theme” in the film, perfectly captures the chaste romance between these lonley souls. Surprisingly for some, this haunting score is actually taken from another film, Seijun Suzuki’s YUMEJI, a biopic about painter and poet Yumeji Takehisa, which was released almost a decade before IN THE MOOD FOR LOVE.

When Wong’s films gained attention in the West, especially with the 1995 U.S. release of CHUNGKING EXPRESS, some film critics railed on the director as “all style, little substance,” a product of the MTV generation. These well meaning critics, like Roger Ebert, did make a point in that Wong’s work does have the music video aesthetic of the time. Wong’s work would permeate throughout global media, from Chanel ads to inspiring other music videos like the Scottish pop band Texas with their video for “Halo,” which came out a couple of years after the release of CHUNGKING EXPRESS.

When Wong’s films gained attention in the West, especially with the 1995 U.S. release of CHUNGKING EXPRESS, some film critics railed on the director as “all style, little substance,” a product of the MTV generation. These well meaning critics, like Roger Ebert, did make a point in that Wong’s work does have the music video aesthetic of the time. Wong’s work would permeate throughout global media, from Chanel ads to inspiring other music videos like the Scottish pop band Texas with their video for “Halo,” which came out a couple of years after CHUNGKING EXPRESS.

Wong Kar Wai, especially in his greatest streak of filmmaking throughout the ’90s was that quintessential filmmaker, much like his Western contemporaries Quentin Tarantino, Steven Soderbergh or David Fincher, who were defined in this decade. Aside from the aesthetic, it was also their use of music that helped define their status in global cinema, settling in nicely with a generation of cineastes bred on postmodernism and pop culture, directing films that were very much of their time, passed along on VHS’s like the ultimate mixtape.  As a Gen X-er, this decade, as well as filmmakers like Wong Kar Wai, were formidable influences in my cultural tastes and outlook.

This being 2021, we can still partake in a WKW listening party with this super fan’s epic Spotify playlist.  So, let the melancholy sink in, put on some headphones, and reminisce of fleeting youth and heartbreak.

PrevPreviousWORLD OF WONG KAR WAI: Mastery of Retrospection, by Taylour Chang
NextHIFF SELECT AUGUST: THE WITCHES OF THE ORIENTNext