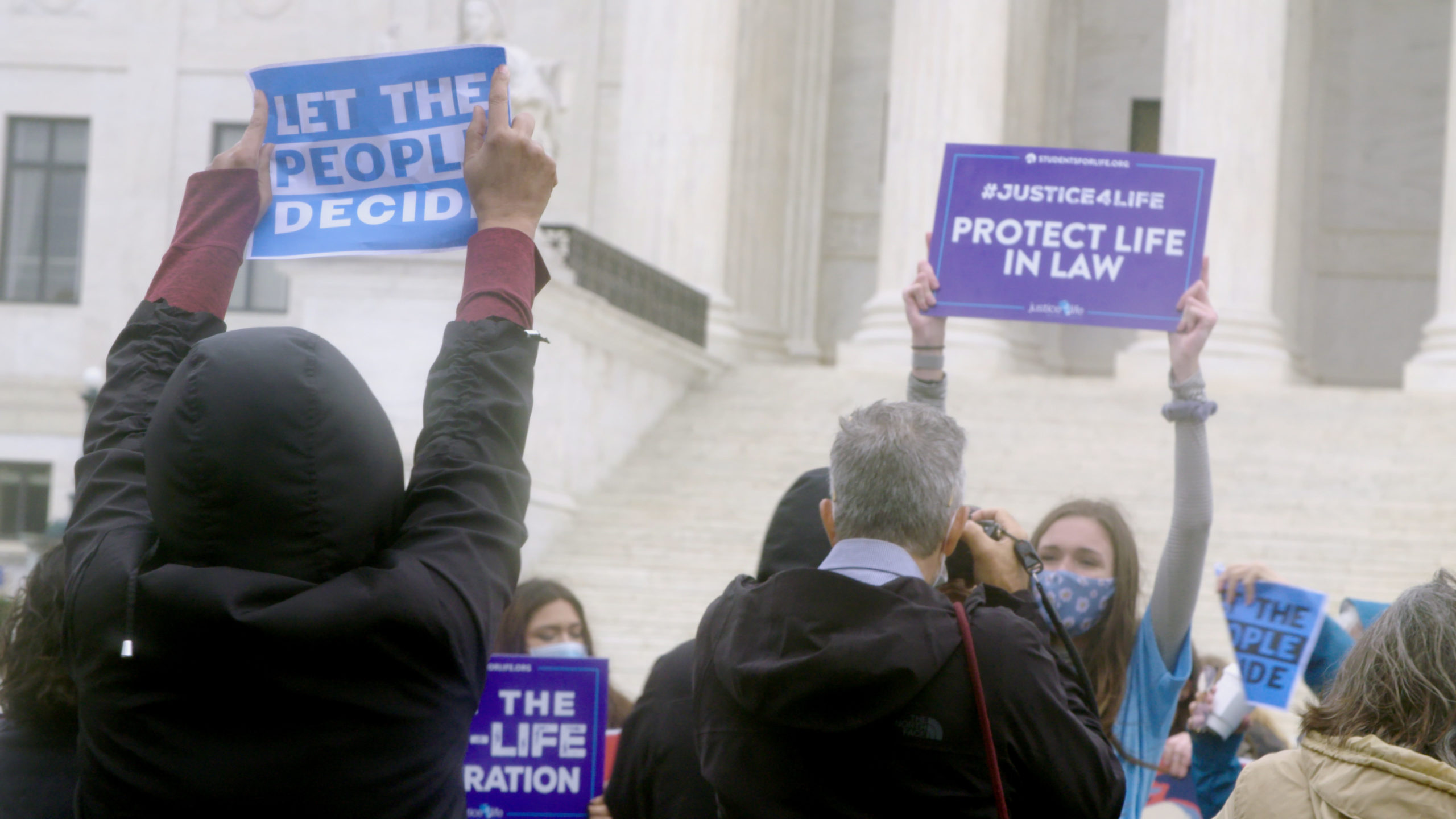 If the fall of Roe v Wade has become a moment to take a closer look at politics, power, and rights to bodily autonomy, then Cynthia Lowen’s documentary BATTLEGROUND offers a clarifying lens.

Lowen gives viewers access to the inner workings of the pro-life movement, a movement that many in the U.S. have underestimated. Days before the 2016 election, we hear closed-door conversations with Steven Bannon, Donald Trump, and leaders of the evangelical conservative Christian Right. We also go backstage at pro-life gatherings and meet a loyal cadre of pro-life college students and their dedicated rhetoricians. And, finally, we go to the voting booth with a self-identified “progressive” atheist who withholds her vote for Trump and cheers when Supreme Court Justice Ruth Bader Ginsberg dies, creating the window for Justices Neil Gorsuch, Brett M. Kavanaugh, Amy Coney Barret to ascend to the court. These film moments reflect an ongoing fifty-year realignment of a political party and its allies who once historically advocated for personal liberty, responsibility, privacy, and limited government.

It’s worth remembering that Republican George H. Bush once supported and co-authored the Title X Family Planning program, and then President Richard Nixon signed it into law. For decades, family planning and access to contraceptives was a standard of public health for the Republican Party. In recent times, however, the party’s leaders have pursued state-by-state bans on reproductive rights. Now, in our post-Roe political landscape, the party seeks a national ban over people’s bodies and private health care decisions. While pro-life lawmakers sometimes promise to strengthen a safety net for pregnant people, it is often the states that limit abortion access most severely that have the weakest family support systems. In viewing BATTLEGROUND, one may consider Dr. Diana Greene Foster’s Turnaway Study, which provides an examination of the long-term socio-economic harm of forced parenting. Given that lack of abortion access takes the heaviest toll on the poorest people, Lowen initially went to places like Alabama, where abortion was first criminalized in 2019 and the entire state had only one abortion provider.

Whether conservative voters like it or not, they are now yoked with single-issue pro-life voters that co-opt social justice language, as with the phrases “Pro-Life=Pro-Woman” and “Black Pre-Born Lives Matter.” BATTLEGROUND asks: Is the U.S., which has the highest maternal mortality rate among developed countries, a democracy in decline? In this way, BATTLEGROUND is a fine work of oppositional research from a self-avowed pro-choice filmmaker who respects both the film’s subjects and audience enough to allow them to come to their own conclusions.

In Hawaiʻi, where abortion and contraception remain safe, legal, and available, concerns among the general public about abortion stigma nevertheless persist. For households still reeling from COVID-era inflation, debt, and unemployment, abortion can delay an unexpected pregnancy until a family and home is fully prepared to raise a child. Across the islands, the call for ongoing vigilance to safeguard bodily autonomy, dignity, and human rights is, perhaps, taken most seriously by millennials and members of Gen Z who led an intergenerational coalition this past summer. Recently, the Hawaiʻi Abortion Collective compiled a resource guide to support those exploring pregnancy options and abortion. Thanks to their grassroots leadership and the legal protections fought for and won in the past, Hawaiʻi will continue to be a leader in reproductive and sexual health. In the words of one of the coalition’s youngest members, “One in four of us loves someone who has had an abortion. Let’s remember abortion is health care and it is a human right.”

Based in Honolulu, Grace is passionate about supporting families, youth-serving professionals, and young adults to have open, honest conversations about bodily autonomy, consent, and meaningful and respectful relationships. For the last twenty-five years, they have been retained as a consultant for expertise in local and national organizing efforts for reproductive justice.