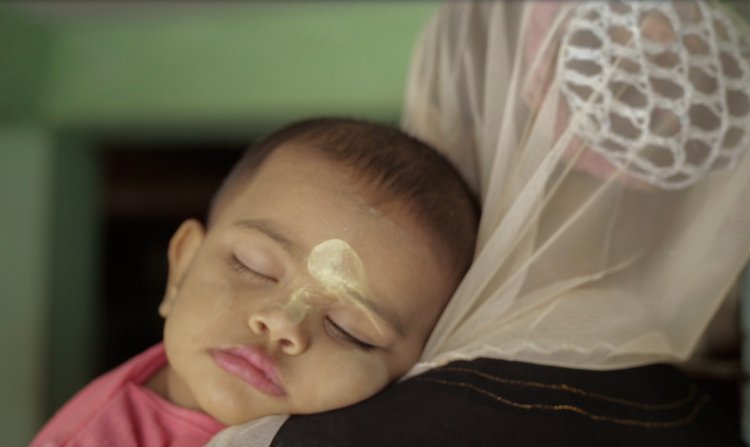 MIDWIVES is director Snow Hnin Ei Hlaing’s first feature film, winner of the Sundance Film Festival’s Excellence in Vérité Filmmaking award. The film follows the lives of Hla, a Buddhist midwife, and her Muslim apprentice, Nyo Nyo, in Rakhine state, Myanmar. Their lives as midwives serve as a microcosm of the struggles to survive in a country racked by violence from ethnic genocide, forced expulsion, and competing political power. But whereas the hardship embodied in third-world women is often represented to evoke pity and invite the “white savior” within us (even when we are not white), MIDWIVES precludes that possibility and offers us something else entirely.

Life is hard, but MIDWIVES gives that hardship historical specificity, political texture, and personified agency. The film excels at capturing the stark contrast and simultaneousness of living amidst bombs and beautiful landscapes: that life is both inevitably interrupted and must go on at the same time. It weaves in the banality of everyday life, including the TV programs that play songs propagating Buddhist (i.e., Rakhine) superiority and hatred against Muslims (i.e., the Rohingya), to show how even as Hla is risking her life by treating Muslim patients and teaching Nyo Nyo to be a midwife, she, too, internalizes these values. Hla calls Nyo Nyo “kalar” (darkie, Muslim) who can never be taught to be like her. She sees Nyo Nyo’s desire for modernity and materiality as a shortcoming and the source of their conflict. By capturing the tension between Hla and Nyo Nyo, the film refuses to homogenize the women as belonging to the same oppressed group. In fact, narrating the complexity and contradiction that Hla and Nyo Nyo experience and must navigate is key to the film’s success. This strategy of representing contradiction allows the film to deliver a depiction of humanity at its most vulnerable and intimate—the film even begins with a scene of women-centered childbirth that exemplifies this sentiment.

MIDWIVES portrays how patriarchy, power, and politics permeate the everyday life of these women—Nyo Nyo claims that it is hard to be a woman as she is expected to care, cook, and clean after her husband and children. Yet, the film unfailingly returns to how resilient Nyo Nyo and Hla are, albeit in different ways. Hla opens fish and popsicle businesses when her clinic is temporarily shut down; Nyo Nyo practices her entrepreneurial skills by gathering resources as she prepares to open her own clinic.

For the American audience, Nyo Nyo provides us with a different and more nuanced representation of the life of a Muslim woman. As Nyo Nyo claims, being a Muslim itself is not the problem, but rather, being a Muslim born in Rakhine state limits her mobility and livelihood. As it is in the United States, in Myanmar, too, the racial ideology upholding Muslims as terrorists is used to argue for their oppression (and even genocide). Here, connections across national contexts need to be made and questioned: at a global level, how do societies and nations benefit from the transnational circulation of anti-Muslim ideology?

Ending with a scene of Nyo Nyo and her daughter on a bicycle, the film forecloses our impulse to play the “white savior” role as it highlights Nyo Nyo’s success as a Muslim woman in a country that aims to erase her very existence. Instead, it provides us with a space to pause and ponder: Where are we situated within global structures of political and economic inequality, and what roles do we play in maintaining this power hierarchy?

L. Ayu Saraswati is professor in Women, Gender, and Sexuality Studies at the University of Hawai‘i at Mānoa. She is the author of Pain Generation: Social Media, Feminist Activism, and the Neoliberal Selfie and Seeing Beauty, Sensing Race in Transnational Indonesia.