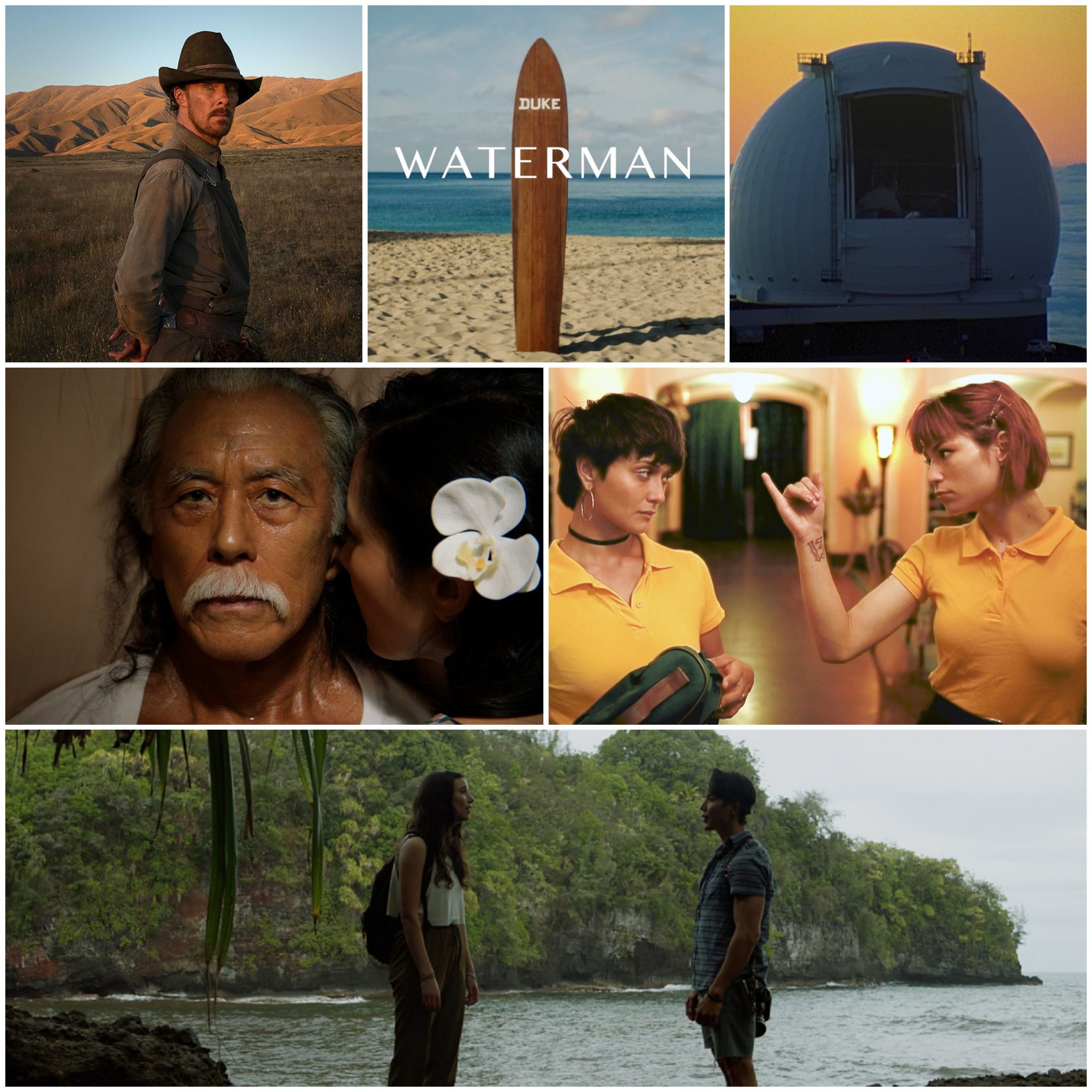 The 41st Hawai‘i International Film Festival presented by Halekulani (#HIFF41) will be heading to the Big Island of Hawai‘i at the Hilo Palace Theater from November 18-21. Highlights include new films from Okinawa (MIRACLE CITY KOZA), New Zealand (HIGH TIDE DON’T HIDE), as well as from legendary auteurs like Jane Campion with THE POWER OF THE DOG starring Benedict Cumberbatch. Other highlight is the feature film debut of celebrated experimental artist Fern Silva called ROCK BOTTOM RISER, shot on Hawai‘i Island that is less palimpsest and more cinematic mixtape on Native Hawaiian history. Hawai‘i is strongly represented with Christopher Makoto Yogi’s I WAS A SIMPLE MAN, which world premiered at Sundance, two MADE IN HAWAI‘I SHORTS programs including CASHBACK from Zoe Eisenberg and also filmed on location at the Palace, as well as AREA 77 and TROUBLE IN PARADISE, which were also shot on Hawai‘i Island. HIFF is also honored to present the Big Island premiere of WATERMAN, the definitive documentary on the life and legacy of Duke Kahanamoku and narrated by Jason Momoa.

7:00pm WATERMAN (USA, Hawai‘i, 2021): Surfing legend. Olympic superstar. Hawaiian Icon. American hero. Five-time Olympic medalist and Native Hawaiian Duke Paoa Kahanamoku shattered records and brought surfing to the world while overcoming a lifetime of personal challenges. Narrated by Jason Momoa, WATERMAN explores his journey and legacy as a legendary swimmer, trailblazer, and the undisputed father of modern-day surfing, following the sport’s first-time inclusion in this year’s Olympics – a fitting tribute to his work promoting the sport around the globe. Through Duke’s incredible athletic accomplishments and embodiment of the Aloha spirit, the film celebrates his triumphs and philosophy of inclusion, challenging us all to embrace diversity and incorporate Aloha into our own lives.

5:00pm MIRACLE CITY KOZA (Japan, Okinawa, 2021): Koza City, Okinawa, present day. Shota, the grandson of legendary rocker Haru, has been spending his days in idleness, when his grandfather is killed in a traffic accident. Shortly thereafter, Haru’s ghost appears to Shota with an otherworldly proposition: trade bodies so grandpa can take care of unfinished business! Suddenly, Shota finds himself transported to the 1970s, his spirit transmuted to the then young Haru. The problem is Shota doesn’t know how to play rock n’ roll…

5:00pm BELLE (Japan, 2021): Suzu is a 17-year-old high school student living in a rural village with her father. For years, she has only been a shadow of herself. One day, she enters “U,” a virtual world of 5 billion members on the Internet. There, she is not Suzu anymore but Belle, a world-famous singer. She soon meets with a mysterious creature. Together, they embark on a journey of adventures, challenges and love, in their quest to become who they truly are. BELLE is the latest masterpiece from Oscar® nominated Mamoru Hosoda (SUMMER WARS, WOLF CHILDREN, MIRAI) and had its world premiere at the Cannes Film Festival, receiving universal acclaim.

8:00pm THE POWER OF THE DOG (Australia, Canada, New Zealand, United Kingdom, United States, 2021): Created by legendary director Jane Campion, Phil (Benedict Cumberbatch) instills fear in the eyes of those around him. His brother (Jesse Plemmons)—all too aware of his brother’s menacing nature—decides to bring home a new wife and her son. But Phil employs his most deadly, awe-inspiring capacity to inflict fear in his brother’s new wife and son. THE POWER OF THE DOG explores toxic masculinity and living between the borders of insanity and passion.

1:30pm HIGH TIDE DON’T HIDE (New Zealand, 2021): While Greta Thumberg has led the movement for environmental reform, many teenagers around the world also rally in favor of her sentiments. In HIDE TIDE, DON’T HIDE, five New Zealand teens join the global movement to end the climate crisis. But after a young indigenous activist highlights the movements’ lack of diversity, especially since the climate crisis disproportionately affects indigneous communities, the group must confront its own prejudices and inequality in their activism.

4:00pm ROCK BOTTOM RISER (USA, 2021): Hawai‘i’s swirling, roiling flow of volcanic lava provides the anchor for this energetic, visually and sonically bold cinematic essay by experimental filmmaker Fern Silva. Filled with astounding telescopic imagery and engaging digressions into philosophically related phenomena, ROCK BOTTOM RISER breaks temporal and generic boundaries, touching upon everything from astronomy to geology to ethnography, from the origins of the universe to colonialism’s remapping of our planet. Silva erupts all notions of what one might expect from “nature documentary” filmmaking, and shows viewers familiar worlds made alien.

7:00pm I WAS A SIMPLE MAN (USA, Hawai‘i, 2021): Masao is an aging man who lives a solitary existence on Oʻahu’s North Shore. But when he learns that he’s not long for this world, his life’s regrets begin to surface, like a slowly rising tide. As Masao becomes bed-ridden, previously distant sons and daughters trickle into his home to provide end-of-life care. Most mysteriously, Masao’s late wife, Grace, returns to haunt him, triggering flashbacks to the past Masao must learn to confront.

Come celebrate HIFF and the power of cinema in bridging cultures, diversity and to be engaged with a myriad of stories unspooling at HIFF in Hilo–On the Big Screen! Advance tickets on sale now at HIFF41’s official website, www.hiff.org.