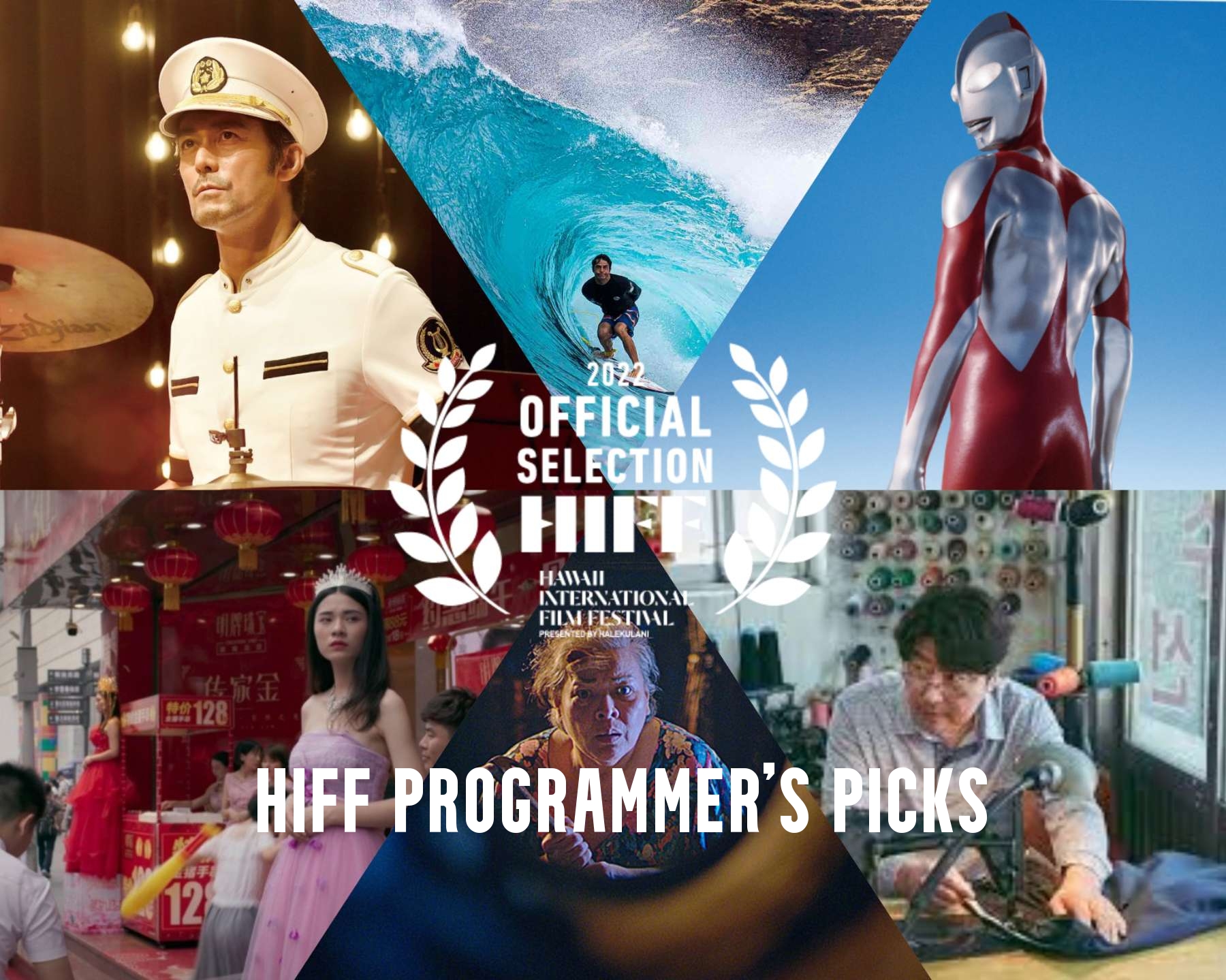 BROKER (South Korea, 2022, 129 min, Dir: Hirokazu Kore-eda)
Academy Award nominated filmmaker Hirokazu Kore-eda (SHOPLIFTERS) returns with BROKER, starring Song Kang Ho (PARASITE). The film follows two brokers who sell orphaned infants, circumventing the bureaucracy of legal adoption, to affluent couples who can’t have children of their own. After an infant’s mother surprises the duo by returning to ensure her child finds a good home, the three embark on a journey to find the right couple, building an unlikely family of their own. This year’s VISION IN FILM Honoree, Director Kore-eda will be in attendance to introduce the film (first screening only)! November 12, 8:30pm / November 13 8:00pm Consolidated Kahala

FASHION REIMAGINED (UK, 2022, 100 min, Dir: Becky Hutner)
The daughter of environmental activists, Mother of Pearl designer Amy Powney has always felt out of place in the fashion world. FASHION REIMAGINED follows Powney’s trajectory from outsider to industry leader as she sets out to create a collection that’s ethical and sustainable at every level, from fiber to finished garment. Powney’s journey will take her from idyllic Uruguayan sheep pastures to an Austrian garment factory powered by steam, exposing the mind-boggling complexity and waste of the global supply chain. November 4, 6:15pm / November 6, 12:30pm Consolidated Kahala

MIDWIVES (Canada, Germany, Myanmar, 2022, 91 min, Dir: Snow Hnin Ei Hliang)
Two midwives, one Buddhist and one Muslim, defy strict ethnic divisions to work side by side in a makeshift clinic in western Myanmar, providing medical services to the Rohingya of Rakhine State. Over five years we witness their struggles, hopes and dreams amidst an environment of ever-increasing chaos and violence.between the communities. Director Snow Hnin El Hlaing captures a story of female self-determination in the face of militaristic oppression. November 11, 6:15pm / November 13, 5:00pm Consolidated Kahala

NEXT SOHEE (South Korea, 2022, 100 min, Dir: July Jung)
Young Sohee enters a job training program working at a call center, where she is soon abused in a vicious cycle of incentives and the risk of termination. It takes a toll on her and her coworkers reaching a breaking point when her manager commits suicide. Enter Detective Yu-jin (Bae Doona), who embarks on a personal crusade to uncover the truth behind this tragedy, and soon finds herself immersed in a world of institutional corruption. NEXT SOHEE is powerful, essential work inspired by actual events. November 8, 8:00pm / November 13, 3:00pm Consolidated Kahala

OFFBEAT COPS (Japan, 2022, 119 min, Dir: Eiji Uchida)
OFFBEAT COPS follows an overbearing, loose-cannon detective (played with sublime command by the always terrific and charismatic Hiroshi Abe, THERMAE ROMAE) who, after going full “Dirty Harry” one time too many, is handed a fate worse than the indignity of a firing: he is shunted off to the police band, in bad need of a drummer for its final concert. Humiliated, he barks up a blue streak, until he starts feeling the beat and gets a chance at redemption. November 5, 8:00pm / November 13, 7:15pm Consolidated Kahala

REMEMBER (South Korea, 2022, 128 min, Dir: Lee Il-hyung)
A part-time TGIF server named “Freddie” Pil-ju (Lee Sung-min), in his 80s and suffering from alzheimer’s disease, embarks on a long-awaited vengeance plot against pro-Japanese Imperialism collaborators that led to his family’s death decades before. An adaptation of the 2015 German film REMEMBER, director Il-Hyung Lee hones in on the trauma felt by the last remaining survivors of the Japanese occupation of Korea, in a moving story of grief, loss, and betrayal wrapped inside an action-packed thrill ride. November 5, 2:45pm / November 6, 5:00pm Consolidated Kahala

SHIN ULTRAMAN (Japan, 2022, 112 min, Dir: Shinji Higuchi)
One of Japan’s most revered tokusatsu series of all time gets a shiny reimagining from creative titans Hideaki Anno and Shinji Higuchi in SHIN ULTRAMAN. With updated special effects and a bigger budget, but still honoring the franchise’s classic rapid-fire technobabble, odd camera framing and campy bravura. Headlined by Japan’s biggest stars Takumi Saitoh (HIFF 2018 Maverick Award honoree, who will also be in attendance to introduce the Oahu screenings), Masami Nagasawa, and Hidetoshi Nishijima (DRIVE MY CAR), this is the kind of reboot that both new and old school fans will enjoy! November 12, 5:45pm / November 13 3:00pm Consolidated Kahala; November 18, 8:30pm Palace (Hilo)

MY SMALL LAND (Japan, 2022, 114 min, Dir: Emma Kawawada)
For Sarya (17), a Kurdish refugee girl in Japan, life seems to be looking up; her grades at school are enough to pursue college, she’s surrounded with good friends and her relationship with Sota is becoming special. Sarya’s life gets upended, however, when she learns that her family’s refugee status is turned down. Sarya is now suddenly forced into a situation where she is responsible not only for her younger siblings but for her very existence. November 9, 7:00pm / November 10, 3:00pm Consolidated Kahala; November 19, 2:00pm MACC (Maui)

THE LAST 10 YEARS (Japan, 2022, 125 min, Dir: Michihito Fujii)
Based on a bestselling novel. Matsuri (Nana Komatsu) is suddenly diagnosed with an incurable disease and told she only has 10 years left to live. Kazuto, having lost the place where he belonged, is not sure what he wants to do with his life anymore. When they meet and their relationship blossoms, their everyday lives take on a whole new shine. A stunningly beautiful romance, this Japanese box-office smash is a tear-jerker for the ages. November 6, 5:30pm / November 12, 1:00pm Consolidated Kahala

TANG AND ME (Japan, 2022, 115 min, Dir: Takahiro Miki)
Ken (Kazunari Ninomiya of JPop supergroup ARASHI) has given up on his life and his training as a doctor since the tragic death of his father, and does nothing but play videogames, much to the chagrin of his loving wife Emi (Hikari Mitsushima). One sunny morning, Ken discovers a small rusty robot in his backyard and tries to chase it away. But the robot won’t leave. However, unbeknownst to Ken or even the droid, Tang holds world-changing technology in his rusty innards. Perfect film for the entire family! November 5, 5:30pm / November 10, 5:30pm Consolidated Kahala

HUNT (South Korea, 2022, 125 min, Dir: Lee Jung-jae)
SQUID GAME superstar Lee Jung-jae makes his directing debut with this 1980s-set thriller, in which he also plays an intelligence chief who uncovers a plot to assassinate the president of South Korea while hunting for a mole within his own agency. Korean superstar Jung Woo-sung co-stars as a fellow agent also trying to smoke out a mole. HUNT plunges the viewer into a labyrinth of secrets where nothing is quite what it seems. The result is one of the most impressive action movies in years. November 9, 7:00pm / November 12, 3:00pm Consolidated Kahala

STONEWALLING (China, 2022, 147 min, Dir: Huang Ji, Ryuji Otsuka)
20 year-old Lynn is told she needs English classes, flight attendant school, and a go getter-attitude. She perseveres along this path of upward mobility until she finds out she’s pregnant. Indecisive and running out of time, she tells her boyfriend she’s had an abortion and instead returns to her feuding parents and their failing clinic to try and figure out (if she can) what’s next. November 5, 2:30pm / November 6, 7:30pm Consolidated Kahala

THROUGH THE DOGGY DOOR (USA, Hawai‘i, 2022, 90 min, Dir: Joe Alani)
Sheldon Paishon is a talented surfer born and raised on O‘ahu’s westside. At the age of 12, Sheldon’s family had to relocate to the beach park after losing their house. With a deep drive to overcome all odds and live out his dream of professional surfing, Sheldon has battled through harsh realities, including crime. Taken under the wing of pro surfer Mason Ho, who recognized his immense talent, can Sheldon capitalize on the opportunities afforded him and become a pro surfer? November 9, 7:00pm Consolidated Kapolei / November 12, 3:30pm Consolidated Kahala / November 18, 7:00pm MACC (Maui) / November 19, 5:30pm Palace (Hilo)

LEONOR WILL NEVER DIE (Philippines, 2022, 99 min, Dir: Martika Ramirez Escobar)
Leonor Reyes was once a major player in the Filipino film industry after creating a string of successful action films, but now her household struggles to pay the bills. When she reads an advertisement looking for screenplays, Leonor begins tinkering with an unfinished script. While her imagination provides some escape from reality, she goes all-in after an accident involving a television knocks her out, sends her into a coma, and transports her inside the incomplete movie. November 8, 7:30pm / November 11, 3:00pm Consolidated Kahala

THE SUNNY SIDE OF THE STREET (Hong Kong, Malaysia, 2022, 113 min, Dir: Lau Kok Rui)
For Pakistani refugees, there’s little sunshine on the Hong Kong streets. They can’t work to earn a living, while often waiting years for their asylum claims to be heard. When a refugee has a fateful collision with a cab driver named Yat (Anthony Wong), it sets off a chain of events leading to tragedy for 10-year-old Hassan. When Yat learns the fate of the boy, they form an uneasy father-son relationship as they search for a way to smuggle Hassan out of Hong Kong. November 10, 8:00pm / November 13, 5:15pm Consolidated Kahala