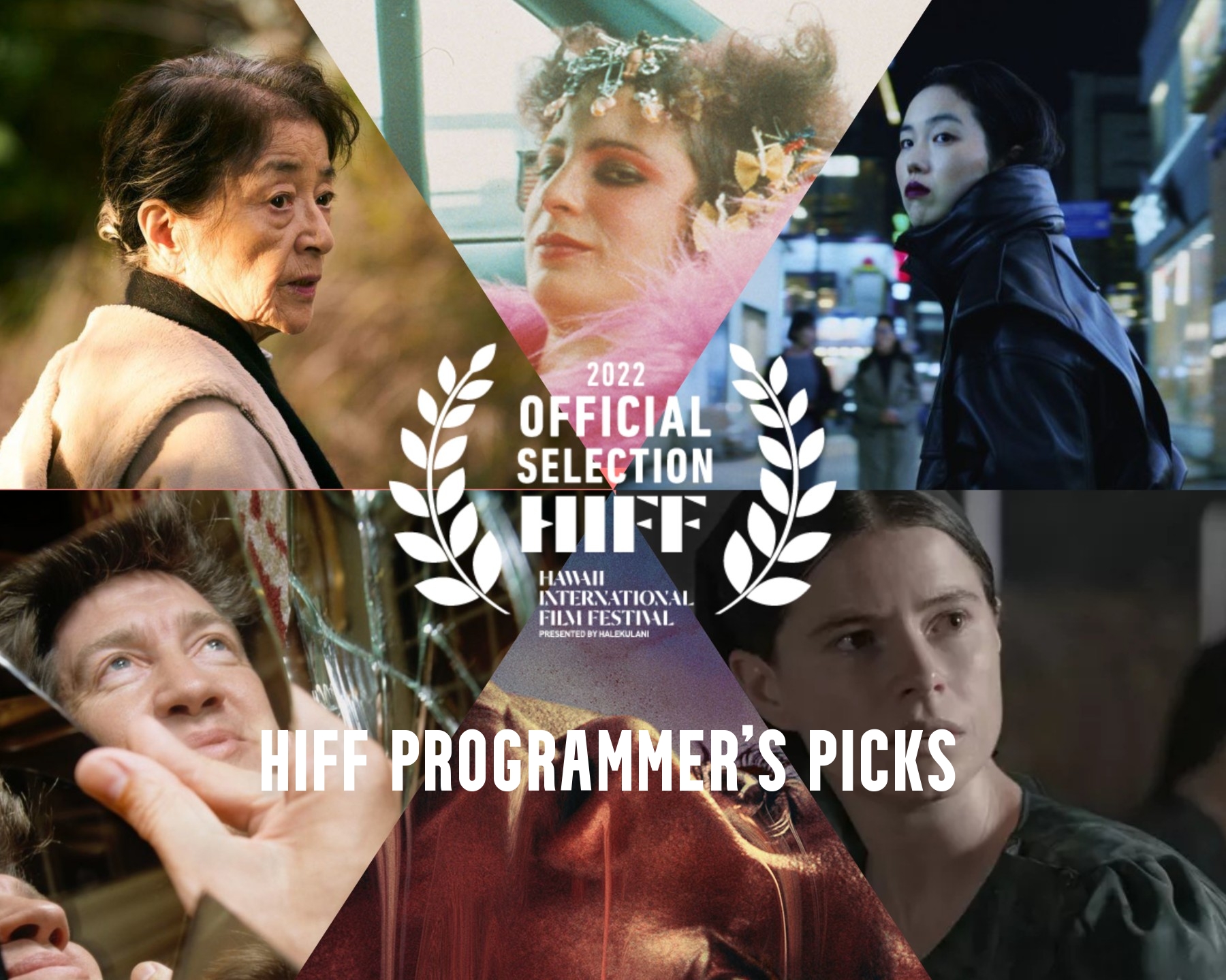 The 42nd Hawai‘i International Film Festival presented by Hakelulani (HIFF42) is here! The fest kicks off with the “hometown” premiere of THE WIND AND THE RECKONING at Bishop Museum’s The Great Lawn and the world premiere of the Japanese drama YUDO: THE WAY OF THE BATH at Consolidated Ward.  With over 102 feature films unspooling on Oahu from November 3rd through the 13th, and online screenings through the 27th, it may be daunting to compile your watch-list. But, don’t fret because the HIFF programmers will be announcing their Recommended Film List starting with Artistic Director Anderson Le’s must-sees at HIFF42:

ALL THE BEAUTY AND THE BLOODSHED (USA, 2022, 117 min, Dir: Laura Poitras)
Directed by Academy Award®-winning filmmaker Laura Poitras, ALL THE BEAUTY AND THE BLOODSHED is an epic, emotional and interconnected story about internationally renowned artist and activist Nan Goldin told through her slideshows, intimate interviews, ground-breaking photography, and rare footage of her personal fight to hold the Sackler family accountable for the overdose crisis. November 7, 8:00pm / November 11, 3:30pm Consolidated Kahala

THE LOST KING (UK, 2022, 108 min, Dir: Stephen Frears)
In the archaeological find of a century, the remains of King Richard III — presumed scattered over 500 years ago — were discovered under a parking lot in Leicester in 2012. The search was spearheaded by amateur historian Philippa Langley, whose passion and unrelenting research were met with skepticism by the academic establishment. Directed by two-time Oscar® nominee Stephen Frears, THE LOST KING is the inspiring true story of a woman who refused to be ignored and took on Britain’s most eminent historians. November 5, 6:15pm / November 7, 5:30pm Consolidated Kahala

LYNCH/OZ (USA, 2022, 109 min, Dir: Alexandre O. Philippe)
LYNCH/OZ explores one of the most fascinating puzzles in the history of motion pictures: the enduring symbiosis between America’s primordial fairytale, The Wizard of Oz, and David Lynch. Through six distinct perspectives, and narrated by some of cinema’s most exciting voices, LYNCH/OZ will take us down the proverbial rabbit hole, helping us re-interpret The Wizard of Oz by way of David Lynch, to deliver a whole new appreciation for Lynch’s symbolism through the lens of his greatest influence. November 5, 8:15pm / November 9, 4:00pm Consolidated Kahala

WILDCAT (USA, 2021, 05 min, Dir: Melissa Lesh, Trevor Beck Frost)
Suffering from depression and PTSD, British Army veteran Harry Turner intends to take his own life in the Amazon rainforest far from his family and home. But once there, he meets Samantha Zwicker, an American scientist with a plan to return an orphaned ocelot to the wild for the first time. Falling in love with the kitten and Samantha, Harry agrees to act as surrogate parent to the ocelot, teaching him to hunt, defend himself, and, most importantly, become wild and leave Harry behind. November 6, 1:00pm / November 8, 4:45pm Consolidated Kahala

THE BLUE CAFTAN (France, Morocco, 2022, 124 min, Dir: Maryam Touzani)
Halim and Mina run a traditional caftan store in one of Morocco’s oldest medinas. In order to keep up with the commands of the demanding customers, they hire Youssef. The talented apprentice shows an utmost dedication in learning the art of embroidery and tailoring from Halim. Slowly Mina realizes how much her husband is moved by the presence of the young man. Director Maryam Touzani asserts her expertise in THE BLUE CAFTAN (only her second feature). November 6, 1:30pm / November 11, 4:00pm Consolidated Kahala

RETURN TO SEOUL (Cambodia, France, South Korea, 2022, 115 min, Dir: Davy Chou)
After an impulsive travel decision to visit friends, Freddie, 25, returns to South Korea for the first time, where she was born before being adopted and raised in France. Freddie suddenly finds herself embarking on (an unexpected) journey in a country she knows so little about, taking her life in new and varied directions. Davy Chou’s RETURN TO SEOUL is an enormously moving film made with verve, sensitivity, and boundless energy, capped by Park as Freddie, in a galvanizing, singular performance. November 6, 8:30pm Consolidated Kahala

PACIFICTION (France, Germany, Portugal, Spain, 2022, 162 min, Dir: Albert Serra)
On the French Polynesian island of Tahiti, the High Commissioner of the Republic and French government official De Roller is a calculating man with flawless manners. His somewhat broad perception of his role brings him to navigate the high end “establishment” as well as shady venues where he mingles with the locals. Especially since a persistent rumor has been going around: the sighting of a submarine whose ghostly presence could herald the return of French nuclear testing. November 7, 7:00pm Consolidated Kahala

NANNY (USA, 2021, 98 min, Dir: Nikyatu Jitsu)
In this psychological horror fable of displacement, Aisha (Anna Diop), a woman who recently emigrated from Senegal, is hired to care for the daughter of an affluent couple (Michelle Monaghan and Morgan Spector) living in New York City. As she prepares for the arrival of the son she left behind, a violent presence begins to invade both her dreams and her reality, threatening the American dream she is painstakingly piecing together. November 11, 8:30pm Consolidated Kahala

EO (Italy, Poland, 2022, 88 min, Dir: Jerzy Skolimowski)
Fresh from its Cannes Jury Prize win, EO is a cinematic delight. With minimal dialogue, striking, sometimes surreal, visuals, and a dream-inspired musicscape, we follow the travels and travails of EO, a circus donkey on the loose. From Poland to Italy EO discovers a few kind hearts, but his interactions with humanity find them mostly lacking whether in conflict with nature or each other. EO opens our eyes through his own sad ones. November 5, 4:00pm, November 13, 11:45am Consolidated Kahala

PLAN 75 (France, Japan, Philippines, Qatar, 2022, 112 min, Dir: Chie Hayakawa)
Japan, in the near future. The government program « Plan 75 » encourages senior citizens to be voluntarily euthanized in order to remedy a super-aged society. An elderly woman who loses the means to live independently, a pragmatic Plan 75 salesman, and a young Filipino caregiver face choices of life and death. Based on the short film PLAN 75 conceived as part of the 10 YEARS JAPAN project, this feature adaptation represents a masterful debut for director Chie Hayakawa. November 12, 6:15pm, November 13, 12:15pm Consolidated Kahala

GAGA (Taiwan, 2022, 111 min, Dir: Laha Mebow)
Autumn and Winter are falling upon the tribal village and reverberating through Hayung’s family. Hayung devoted his whole life to worshiping the deity GAGA. However, after his passing, the tradition has been forgotten. Disinterested in this way of life, his eldest son Pasang joins in the local election campaign, ignoring opposition from his family. Meanwhile, his granddaughter Ali falls unexpectedly pregnant. All of a sudden, the entire family is on the verge of falling apart…Will they mend their relationships in time for Spring? November 9, 7:30pm Consolidated Kahala

SWEET AS (Australia, 2022, 87 min, Dir: Jub Clerc)
With trouble on the homefront,16-year-old Murra embarks on a photo safari through the outback Pilbara region, and rediscovers her love for family, country and, in the process, herself. Beautifully shot by first-time director Jub Clerc, SWEET AS is a charming, joyful and redemptive coming-of-age road film certain to spark joy for all audiences. November 9, 6:00pm / November 12, 11:00am Consolidated Kahala