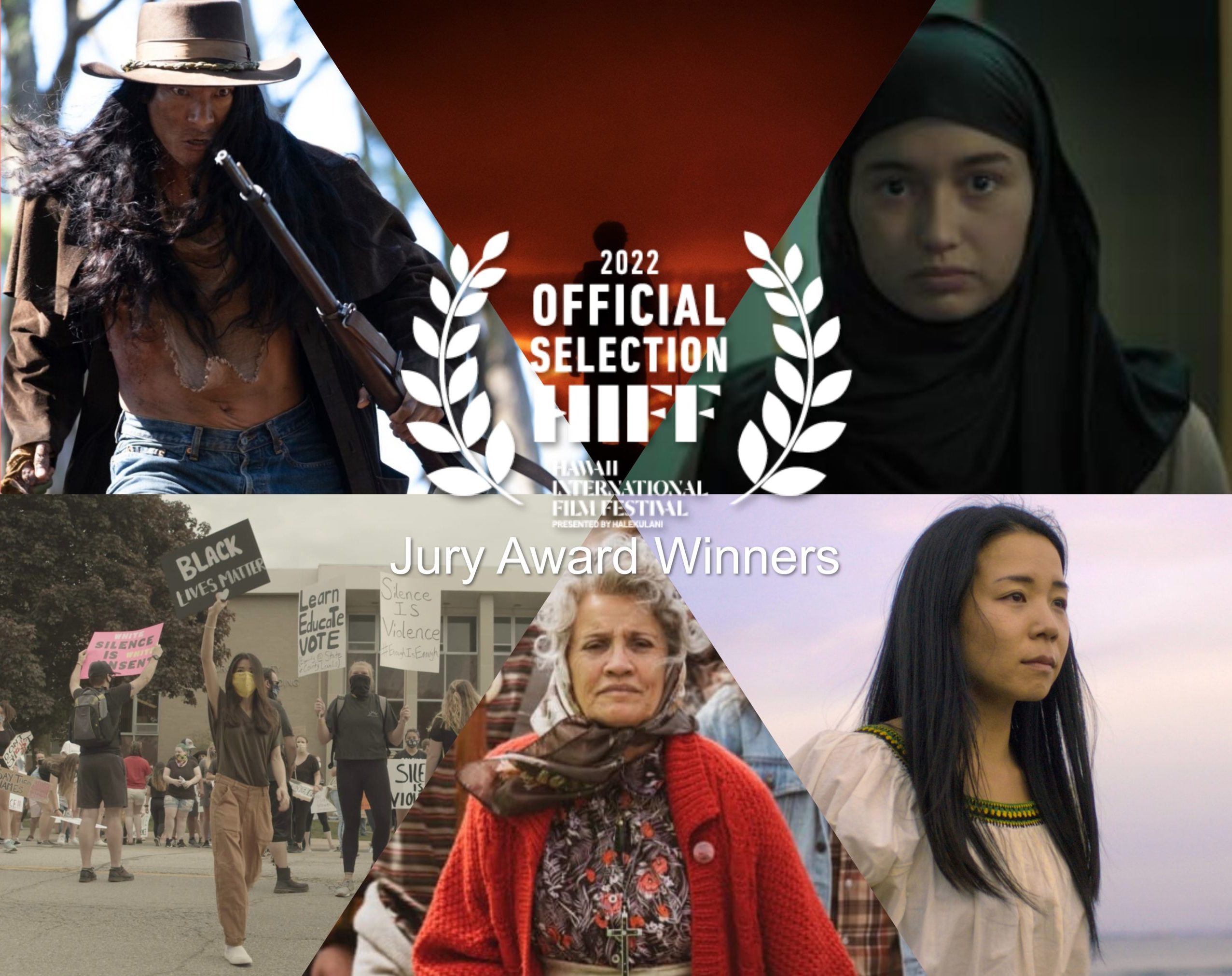 Best Made in Hawai‘i Feature – THE WIND & THE RECKONING

Best Made in Hawai‘i Short – INHERITANCE

November 14, 2022 (Honolulu, HI) – The 42nd edition of the Hawai‘i International Film Festival (HIFF) presented by Halekulani announced its jury winners and celebrated its Awards Gala Honorees at a private event held at the Halekulani Hotel. In its 2022 iteration, the organization awarded $21,500 in cash prizes to filmmakers across respective categories.

MADE IN HAWAI‘I FILM AWARDS

Now in its sixth year, the Made in Hawai‘i Film awards focus on the dynamic and flourishing local independent film scene that strives onward in the Hawaiian Islands. Fiction, Non-fiction and short films that are made by locally-based filmmakers or involve locally-based stories are eligible for the Best Made In Hawai‘i Award. which comes with cash prizes supported by the Nichols Family Film Fund. To date HIFF has awarded $60,000 in cash prizes to the local filmmaking community through the Made in Hawaii Award. The HIFF Made in Hawai‘i film program is supported by Hawai‘i State Film Office and Nichols Film Fund. All films are eligible to be showcased on Hawaiian Airlines as part of HIFF’s ongoing in-flight programming.

The Made In Hawai‘i program told a range of stories, reflecting the diversity of talents and perspectives coming out of Hawai‘i. This year’s Best Made In Hawai‘i Feature winner is THE WIND & THE RECKONING, directed by David L. Cunningham; ​​a film based on real-life historical events and a Native Hawaiian ranching family that defies the oppression of the new colonial government.

The jury shared: “This film is an important Hawaiian story about a tumultuous and tragic time in Hawai‘i history. It is a story of resilience and resistance, of family, courage, aloha, and sovereignty. Spoken predominantly in ‘Ōlelo Hawai‘i, this immersed us in the culture and the people. On behalf of the jury we are honored to present the Made In Hawai‘i Award for Best Feature to THE WIND & THE RECKONING, directed by David L. Cunningham.”

The Made In Hawai‘i jury also recognized INHERITANCE directed by Erin Lau for Made In Hawai‘i Best Short Film. Under HIFF’s new designation as an Academy Award-qualifying festival for short films, INHERITANCE is eligible to qualify. PŌ‘ELE WAI (DARK WATER / AS THE WATER DARKENS, directed by Tiare Ribeaux, received an Honorable Mention.

For INHERITANCE, the jury shared: “This film explores the feelings of sacrifice, loss, and pain, passed down through generations. It authentically portrays one’s connection to place and the difficult decisions we make for our families. We are thrilled to present the inaugural Oscar Qualifying Made In Hawai‘i Award for Best Short Film to INHERITANCE, directed by Erin Lau.”

The jury lauded PŌ‘ELE WAI “for its unique and singular creative vision, non-traditional narrative structure, and the important environmental thematic of water as the sustainer of life.”

This year was significant for HIFF, having received a record of short film submissions, numbering over 2,000 and is designated as a festival of discovery for Asian-Pacific, locally-produced, and Kānaka Maoli cinema.

This year’s HIFF Best Short Film Award winner is THE RED SUITCASE directed by Cyrus Neshvad; a short about a veiled Iranian teenager who is terrified to leave the Luxembourg airport.

The jury shared: “This short told a story that worked on many levels, fully engaging the audience in the plight of a young woman who has been forced by her family into an arranged marriage. Her story captures the many layers of obligation that contribute to this practice and kept us all on the edge of our seats.”

The jury shared: “The story of how Hawai‘i’s tree of life became an ornamental liability moved us. The way the Niu Now project has chosen to forge ahead, with joy, to reestablish food sovereignty and security is inspiring. We were touched by how the next generation of Kānaka Maoli is becoming empowered to achieve that freedom.”

The Kau Ka Hōkū (Shooting Star) Award presented by Hawaiian Airlines is awarded to an international emerging filmmaker (first or second feature film). Both fiction and non-fiction feature films are nominated by the festival programmers and adjudicated by an international jury.

The jury shared “A holistic document of life in America for immigrants, for first generation children, and for a family navigating a global pandemic, a fractured democracy, and the highs and lows of running a small business, in pursuit of the ‘American Dream,’ BAD AXE gracefully weaves together the personal and the political. Director David Siev has provided audiences with an intimate portrait that – though specific to his family in rural Bad Axe, Michigan – becomes a moving, universal story, one of resilience and courage, and of history and forgiveness.”

Founded in 1990 by Cinemaya and UNESCO, the Network for the Promotion of Asian-Pacific Cinema (NETPAC) is an international not-for-profit organization dedicated to promoting Asian and Pacific film throughout the world. The prestigious NETPAC award is given at select international film festivals to promote Asian and Pacific cinema by spotlighting exceptional works and discovering new talent. The NETPAC award is presented annually at international film festivals in Berlin, Cannes, Venice, Toronto, Rotterdam, Busan, Singapore, Taiwan, Yamagata, Amiens and Hawaii. HIFF is the only film festival in the United States given permission to present the NETPAC award.

The jury shared “Not only were we impressed by the seamless flow of the unique stories across time, we were touched by the magic that each of the stories brings and recognize the way this form of anthology film reflects the communal nature of native cultures – some of our strongest works come through collective action. Mahalo.”

The jury stated: “We loved the important historical story of this woman who has to take control in a patriarchal world, for the sake of her people and culture. We see her respond to a call from the younger generation, who seek her aid in continuing the fight for Māori rights. We see how this elder manages to lead, and gets the people on board with her. Fantastic story. The performance of the different Whinas is breathtaking; it is a film of undeniable quality in the direction, writing and acting.”

Each year the HIFF Awards Gala Honorees are celebrated outstanding artists for their commitment to excellence in their field:

Additional information on HIFF42 honorees can be found at hiff.org/hiff42-honorees-awards/

The Audience Awards for Favorite Narrative Feature, Documentary and Short Film, presented by Hawai‘i News Now, will be announced after November 29, 2022.

Although the O‘ahu in-person festival ends, HIFF continues its Festival run with in-person screenings on Maui, Kaua‘i, and Hawai‘i Island from November 17-20. The full Neighbor Island schedule can be found on HIFF’s website.

Made in Hawai‘i Jury Awards:

Established in 1981, the Hawai‘i International Film Festival is a non-profit organization dedicated to the advancement of cultural exchange and media in the Pacific Rim. HIFF is a premier international film event that has won the praise of international filmmakers, scholars, educators, governments, programmers and film industry leaders across the globe. HIFF’s programming has two particular mandates: to be a festival of record for emerging films from Asia, the Pacific, and North America and to present the top festival films from around the world, annually screening films from over 45 countries. HIFF’s Industry and Education programs present free content and panels in the fields of film, music, virtual reality, and new media entertainment. These transmedia programs reflect HIFF’s commitment to exhibiting innovative creative content coming from the Asia Pacific Rim and commitment to establish a pipeline of creative industry talent in Hawai‘i. For more information, visit www.HIFF.org

Under My Umbrella, Inc.